This website or its third-party tools use cookies which are necessary to its functioning and required to improve your experience. By clicking the consent button, you agree to allow the site to use, collect and/or store cookies.
I accept
You are here: Home / Energy Foods / My Stance on Gluten

Do you get heart palpitations?  Unexplained tremors?  Bloating after eating pizza or pasta?  Do you have a skin condition that won’t go away?  Do you have generalized muscle and joint pain? All of these symptoms can be related to a gluten intolerance and should be taken seriously.  Testing yourself to see if you have gluten intolerance is very important to get healthier and stay healthy.

Many of my patients know I take a hard line when it comes to eating gluten.   The fact is, I have no problem with someone eating the odd piece of bread or eating that gourmet cake on your birthday if you can tolerate it.

I don’t want to vilify gluten completely.  I used to love gooey bread and desserts.  So I understand the appeal of treating yourself and the joy it brings.  As well, I know two really good people that followed their dreams and opened up a gourmet bakery shop recently.  I like supporting family owned small business and I find their story inspiring.  The cakes and desserts they make are an art form.  I wish I could tolerate gluten, because I would no doubt be one of their regular customers.  And I wish them nothing but success in their new venture.

What does gluten intolerance mean and why is it important?

Be 100% certain you can tolerate gluten before consuming it

“Gluten doesn’t affect me, I’m fine when I eat it.”

“I get a little bloated after eating bread and pizza, but it’s no big deal.”

“My doctor says my joint pain is just because I’m getting older.  He didn’t say anything about gluten being a problem.”

“I don’t know doc, gluten doesn’t seem to bother me.”

These are typical remarks I get from patients when I have discussions with them about gluten. Maybe you don’t have any of the above symptoms or conditions listed above, and you think gluten doesn’t affect you.  Maybe you’re right.  But what if you’re wrong?  You could be setting yourself up for a serious health problem.

I have two patients that have developed permanent neurological damage because of gluten.  It’s called cerebellar ataxia.  One uses a walker and one has an uncontrollable tremor in his leg.  What has happened with them, is their immune system has produced antibodies to one of the gluten proteins.  The gluten protein looks like the protein in part of the brain that controls movement (the cerebellum).  Over time these antibodies started to attack their own brain tissue and now it’s left them in this state.

My job is twofold: to help patients deal with their immediate health problems and to help my patients avoid chronic illness.  Finding out if you are gluten intolerant sooner than later can save you a lot of heartache later on in life.

A woman and her 5 year-old son from Nunavet came to see me in the summer of 2016.  She wanted to get him tested to see if he had a wheat/gluten intolerance.  When he was two years old he had developed a rash on his stomach.   His Mom took him off gluten and the rash went away.  By the time they saw me the Mom had him off gluten 100%.  I asked her why she wanted to spend money on tests if he was gluten free.  She said she just needed to know with 100% certainty.  So we got him to eat wheat for at least seven days to provocate his immune system and ran some blood tests three weeks later.  These are his Cyrex Array 3 test results: 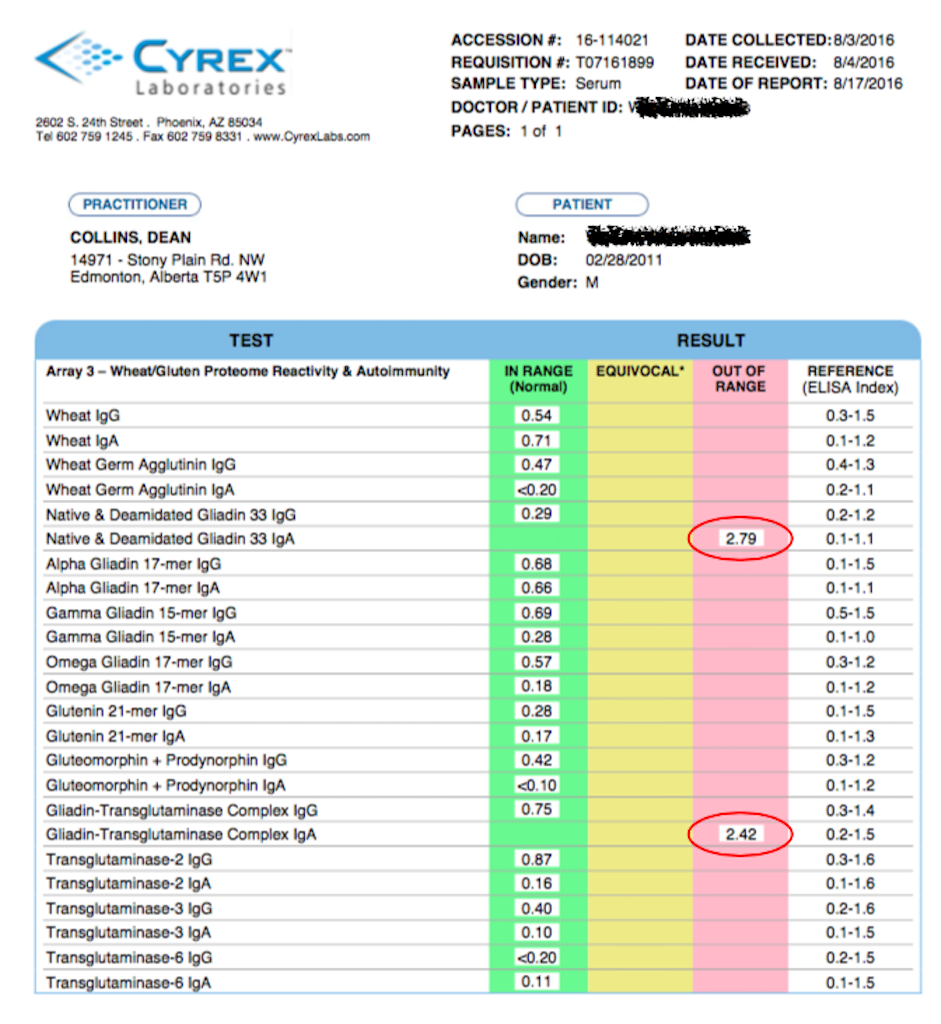 The two numbers I circled in red mean he has a high number of antibodies to a specific gluten protein and an enzyme complex formed by gluten.  The enzyme complex is associated with celiac disease.  The protein he has antibodies to cross-react with numerous tissues and proteins, including myelin basic protein, synapsin, and myocardial peptide.

Myelin basic protein and synapsin are important for proper nerve function.  If you have antibodies to myelin basic protein there is the potential of developing a neurodegenerative illness.  So the Mom understood the importance of keeping him off of gluten. This young boy may have developed a chronic nerve problem as an adult if he ate gluten regularly like the average North American.  This was a very fulfilling case for me because it was all about preventing a chronic illness.

What was also interesting about this case, is he said his heart felt funny when eating gluten.  I expect he had some palpitations and his immune system was affecting the proteins in his heart (myocardial peptide).  I used to get heart palpitations as well when I drank beer.  Beer, in case you didn’t know, has gluten in it.

My recommendation for you

If you’re not 100% committed to going gluten free, make sure you at least get a Cyrex Array 3 test done.  If the test is negative, at least you know that having the odd piece of bread or piece of pizza isn’t going to harm your health.  On the flip side, if the test shows you are positive, it will help reinforce the importance of going gluten free.

I am writing this to thank you for your help and care to make me feel healthy and energetic once again.

I was suffering not only physically but mentally, but your structured health plan guided me to learn more about what health actually means . Eating foods that actually benefit our body versus artificial world of food.

Thank you so much , you have made a huge difference for me and my family.

“The past 13 years have been full of struggles due to chronic pain.  I had spinal surgery  in 1994 which left me crippled and unable to walk without the assistance of a cane.  With an extremely high level of pain, unable to work, and barely surviving, all the specialists gave up.  Then I met Dr. Collins.  After 3 sessions I improved so much that I no longer needed my cane, my pain level went way down, and my quality of life improved ten fold.  It has now been almost three months without my cane, and I am walking faster and sitting for longer periods.  My wife finally gets back the man she met 15 years ago.  Thank you Dr. Collins for giving me my life back, miracles do happen.”

Ready to get your health back?